The CB brace is effective since expertise and technology in medical sites are utilized. Support both patient quality of life and peace of mind!

About 20 years have passed since CB Brace began. All this time, we have been helping patients face their suffering, based on doctors’ diagnoses of pain and disability of the knee. It is impossible to speak of this work without acknowledging the expertise and skills of the doctors and medical professionals.

We will explain precisely the merits and usage of CB Brace to the people concerned, and continue to support patients as a member of the healthcare team. 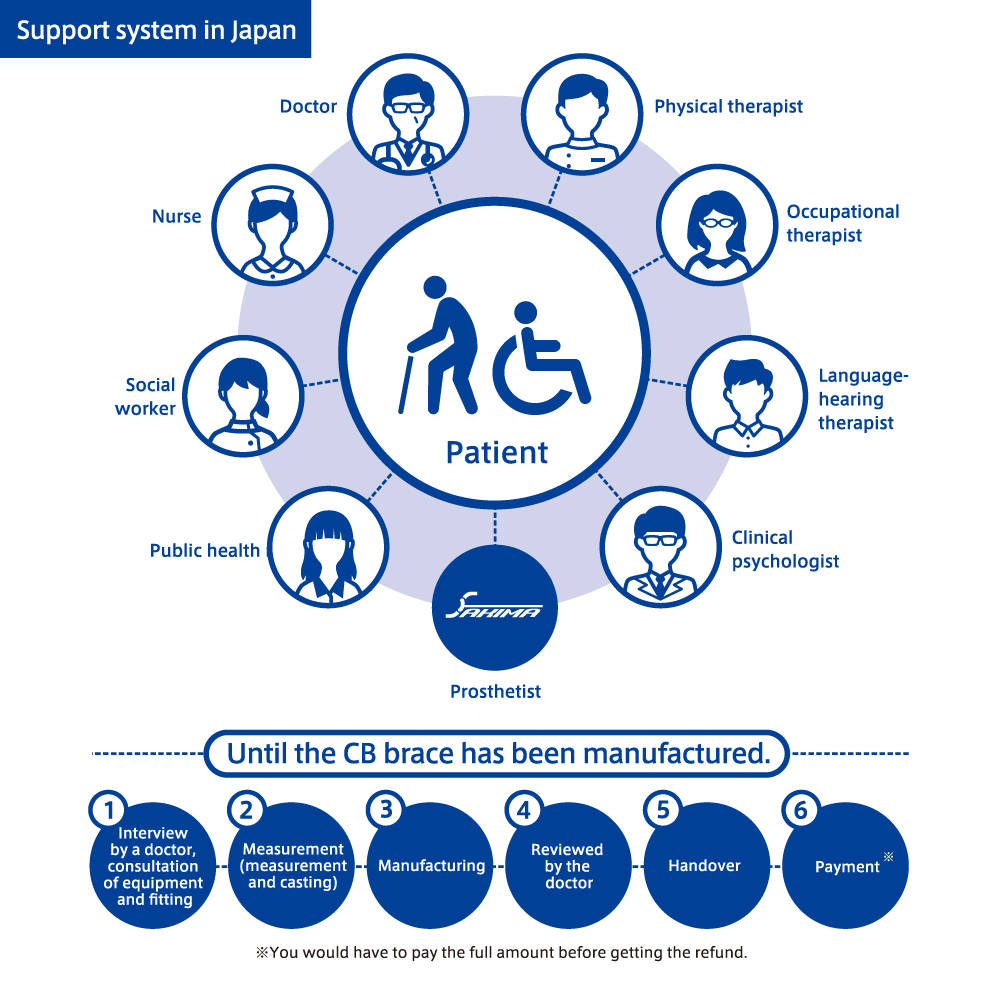 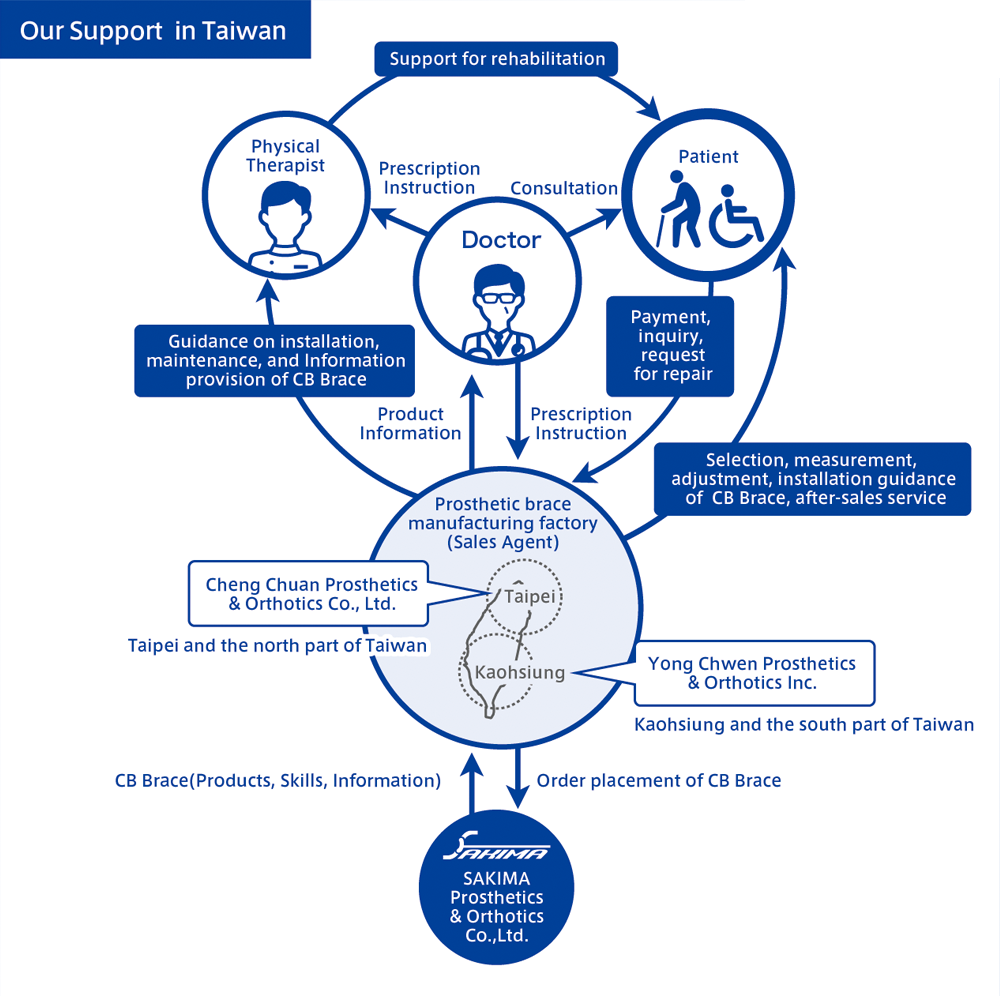 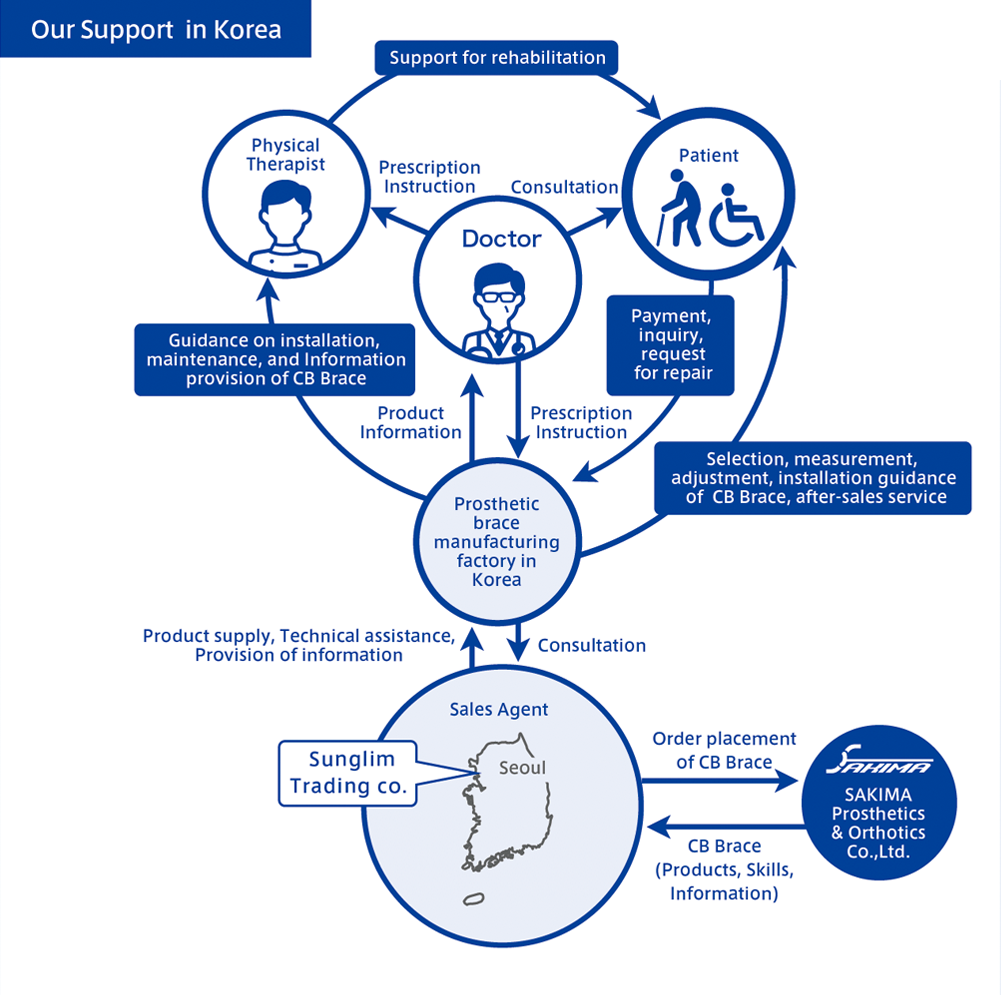 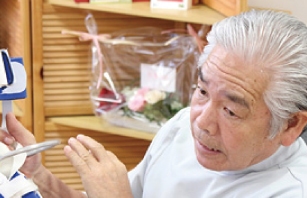 Passion of the developer and technology

Sakima Tamotsu, the inventor of the CB brace, had been battling injury and illness since childhood. The background to the birth of the CB brace is the spirit of ingenuity and the life of the developer. And, it has been passed down to employees. Not only the technology but this spirit and enthusiasm are the greatest strengths of Sakima Prosthetics & Orthotics. 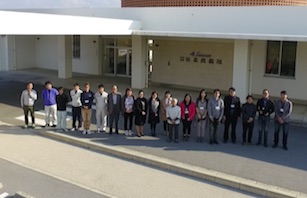 Bring a smile to the customer through team medicine

Sakima Prosthetics & Orthotics proposes products that alleviate the failure, pain, and trouble based on medical practices by doctors and prosthetists who see patients every day. Also, we ask patients to be admitted to proper medical care. 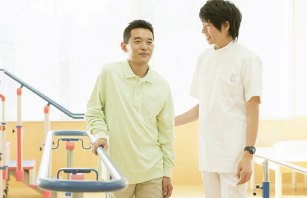 Cooperation with the local community

The entire staff of the company is equipped to provide support to all medical professionals with the cooperation of distributors throughout Japan and around the world. We provide product information and respond quickly to care needs following delivery so that people can use our products safely and properly.

What is CB brace

A brace is “a structure in which a connecting member is incorporated,
with a joint portion and a joint member in the center.”
The brace fittings include the inner and outer struts, which are
connected by a bridge. This is referred to as the center bridge, since the
center of the joint is connected by arched steel.

From this, we have taken the initial letters of Center and Bridge and
named our product CB Brace.

SAKIMA Prosthetics & Orthotics Co., Ltd. has acquired a patent for the
structural concept of CB. 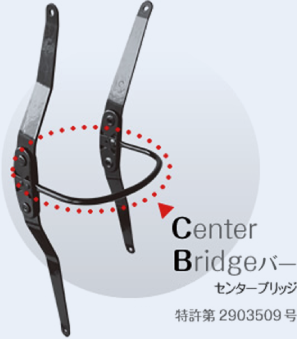 CB Brace realizes stable support, correction, and comfort even when mobile,
without sacrificing supportive capability although it is lightweight.

The CB bar stabilizes movement by suppressing deformation / shaking (thrust) of the joint, improves the load balance of the joint with three-point support and correction, suppresses inflammation, and alleviates pain.
Because the steel components of the entire brace are secured and reinforced by the CB bar, CB Brace is the world’s most lightweight brace. This is accomplished without reducing its supportive capability as a rigid brace, and it provides a comfort level that is close to that of a soft brace. 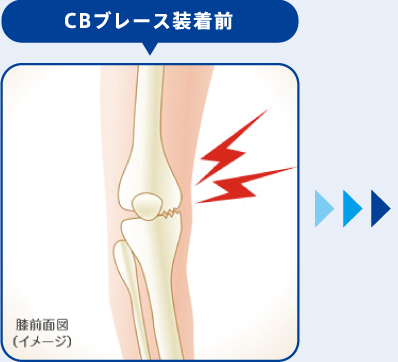 A state where the muscle strength balance collapses,
then thighbone hits tibia to cause pain. 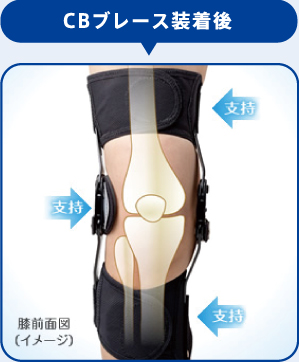 The muscle strength balance is improved by the three-point support correction,then the pain is relieved.

The only brace for genu recurvatum

Our brace for genu recurvatum is at the core of CB Brace.

CB features are utilized to their full advantage against genu recurvatum, a condition that places a heavy burden on joints / fittings.

CB Brace exerts its power not only in everyday life but also at the rehabilitation site.

CB Brace is a unique brace for genu recurvatum that optimizes exercise performance while maintaining high supportive and corrective force.

Firmly prevent excessive extension in the front and in the back

We cherish the testimonials and continue to create. Testimonials from doctors about Sakima Prosthetics & Orthotics

Orthopedists employ braces on a wide range of therapeutic occasions. Traditionally, the fundamental principle of orthopedic therapy was to immobilize the affected region with a plaster cast and let the patient rest.

We used plaster casts for almost everything—injury, infection caused by injury, and during recovery after surgery. Gradually, however, it became clearer that the application of plaster casts for extended periods could cause adverse effects such as reduced range of motion or muscle atrophy. We recognized, therefore, the importance of approaching the immobilization of joints less invasively. The use of the brace was part of this recognition. A brace can limit specific joint movement to within the necessary range. It also allows more precise adjustment compared with a plaster cast, adjustment such as movement in a certain direction while limiting movement in a specific direction. A brace can also be taken off, which allows the patient to bathe or shower.

CB braces have overcome this problem. The greatest feature of the CB brace is the CB bar, which is U-shaped and placed to the rear of the knee joint. This bar has made the brace extremely stable against external force. While a square design can easily deform, the triangle design does not. We once believed that placing a bar at the rear of the knee joint would interfere with knee movement. However, the bar did not restrict knee joint movement at all. When I first heard about the CB bar from President Sakima, I still had my doubts. However, when I saw the CB brace, I completely understood the principle, and was impressed with his breakthrough. The development of this CB bar has overcome the disadvantages of conventional braces completely.

Currently, we are developing a new brace that actively reduces the load on the knee joint. Development is based on the CB brace concept; and Keio University Sports Medicine Research Center is working in cooperation with Sakima Prosthetics & Orthotics Co., Ltd. and Kin Rehabilitation Clinic. We believe this new brace takes full advantage of the merits of CB braces. We are now in the clinical trial stage, and are looking forward to introducing it to the market in the near future.

[When I saw the CB brace for the first time]

I first saw the CB brace in a video of the Hemiplegia Patients Golf Competition in Okinawa held on January 26, 2013. The video was given to me by Sokatsu Yamamoto, Professor at Kumamoto Health Science University, who had served as an advisor to the event.

It was impressive to see players who had been having trouble walking, who had been using their golf clubs like a cane, have their back knees, bow legs or knock knees corrected, their pain reduced, and their walking stabilized. I was moved to see that the participants could continue playing comfortably throughout the competition.

An individual with diplegia caused by CP underwent release and lengthening surgery for muscles around the thighs and knee joints to improve scissor legs at six years of age. However, the subject experienced significant muscle weakening and back knees in both legs, and had difficulty standing alone at the age of 13. The individual underwent treadmill therapy wearing the CB brace in addition to knee walking, which led to the subject being able to walk indoors by the age of 15. The CB brace stabilized the knee joints and exerted a favorable influence on reinforcement of hamstring, quadriceps muscle, and the gluteal muscle.

An individual with DAI associated with significant ataxia in both lower legs and another with cerebral arteriovenous malformation suffered back knee on the left leg and had difficulty walking. The CB brace stabilized their knee joints, which improved walking on the treadmill, and enabled them to kneel and walk on their knees. These individuals had severe symptoms that might have made them bedridden; however, the former has become able to maintain a standing posture, and the latter has become able to walk with parallel bars. The CB brace helped to increase the exercise, which had a favorable influence on both individuals.

An individual with traumatic left back knee (after tibial fracture and anterior cruciate ligament injury) were suffering obstinate pain in walking. Living far from the hospital, we asked the individual to wear a CB brace provided by Tamotsu Sakima, President of the CB brace company, for use in research. As a result, the individual could walk smoothly without concern about overextension of the knee. This improvement has enabled the individual to walk outdoors without a cane and without being affected by the weather. Muscle built up on the left leg improved balance during walking, removing pain in the right hip. He was thankful that he could actively get involved in the preparation for the local festival.

[Features of the CB brace]

1. The CB brace stabilizes knee joint and reduces pain, which leads to an increase in exercise, and improved muscle strength and standing posture balance.

2. The CB brace has an innovative hinge joint, which means reduced weight (400 g) and adjustability as well as a wide scope of joint movement. Currently, the application of carbon to the products has made the CB brace lighter.

The CB brace is designed not to slip. However, a secondary measure to prevent slipping according to symptom is required. I sometimes use silicon and felt.

Papers about osteoarthritis of knee.

The origin of the CB brace is an orthotic developed for a hemiplegia patient. CB means Center Bridge. Taking advantage of the simple and ingenious patented technology CB (Center bridge) structure, the equipment was created for use according to the degree of symptoms or disabilities. 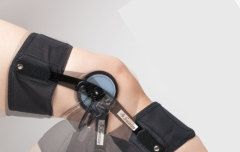 Hyperextension of a knee 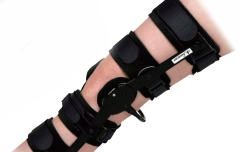